What the Miami-Dade Democrats Accomplished in 2020

In this historic election Joe Biden and Kamala Harris recaptured the “blue wall” states of Michigan, Wisconsin, and Pennsylvania, and became the first Democratic ticket in decades to win Arizona and Georgia! They will take office in January with strong support from our local Members of Congress, Debbie Wasserman-Schultz and Frederica Wilson. 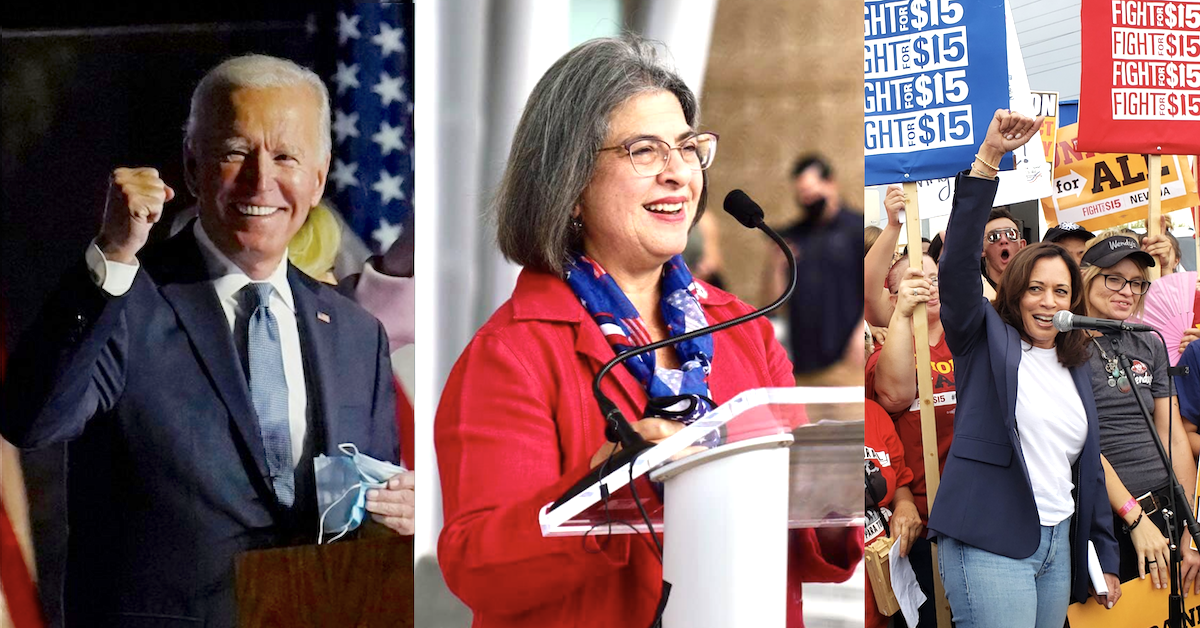 At the county level, we elected Daniella Levine Cava as Miami-Dade County’s first woman mayor, and the first Democrat to serve in this role since 2004. We also re-elected Eileen Higgins as District 5 County Commissioner, following her upset win in a 2018 special election. She’ll be joined on the County Commission by former Miami Gardens Mayor Oliver Gilbert, former City of Miami Commissioner Keon Hardemon, and former State Representative Kionne McGhee. Two of our endorsed candidates—Lucia Baez-Geller and Luisa Santos—won election to the Miami-Dade County School Board, and Harvey Ruvin won re-election as Clerk of the Circuit Court.

In another historic win, Shevrin Jones was elected as the first openly gay Black state senator.  Nick Duran (HD 112) was also re-elected to his seat in the Florida House of Representatives, and Joe Geller (HD 100), Dotie Joseph (HD 108), James Bush III (HD 109) and Michael Grieco (HD 113) were re-elected without opposition, and Felicia Robinson (HD 102), Christopher Benjamin (HD 107), and Kevin Chambliss (HD 117) were newly elected to the Florida House. Finally, we scored a victory for working people all across the state with the passage of Amendment 2 to increase the minimum wage, which was endorsed by the Miami-Dade Democratic Party and garnered support from 60.8% of Florida voters, just surpassing the 60% threshold needed to pass.

In municipal races, five out of our six endorsed candidates—Michael Callahan of Cutler Bay, McKenzie Fleurimond and Michael Joseph of North Miami Beach, and Larisa Svechin and Dana Goldman of Sunny Isles Beach—won their races with the support of our Campaign Committee, our paid staff and countless volunteers.

Although we faced unprecedented challenges due to the COVID-19 pandemic, the Miami-Dade Democratic Party also organized like never before. During this election we launched a first-of-its-kind coordinated local campaign that employed more than 300 paid community engagement organizers. From the beginning of October to Election Day, they knocked on more than 400,000 doors to get out the vote. Their work accounted for half of the doors knocked by Democratic campaigns in the entire state.

Our volunteers also worked like never before, making over 57,000 phone calls and sending more than 1.2 million text messages to voters. Special thanks goes to Giorgio Savron for using his technical expertise to bring our custom texting platform online! Thanks also goes to the hundreds of volunteers, both in and out of state, who wrote and sent more than 300,000 postcards to Miami-Dade voters with information about early voting and voting by mail! Even the sharing of content for ballot recommendations was tremendous. We received over 140,000 visitors to our website from South Florida alone, and over a quarter of a million people from around the country viewed our list of Joe Biden’s career accomplishments.

In the last weeks leading up to Election Day, our Voter Protection Team, made up of more than 300 remote volunteers and more than 150 canvassers going door-to-door, helped thousands of voters cure mail ballots that were missing a signature. Our volunteers made phone calls and knocked on doors to make sure that these votes were counted, and we thank them for their dogged commitment to our democracy!

Of course, we wanted to win every race up and down the ballot, and we’re saddened that, for the time being, Donna Shalala, Debbie Mucarsel-Powell, José Javier Rodríguez, Javier Fernández, and Cindy Polo won’t be representing us in Washington, DC and in Tallahassee. Nevertheless, we couldn’t be prouder of the work that they’ve done to represent us. We are also proud of first-time candidates like Maureen Porras, Annette Collazo, Jean-Pierre Bado, Franccesca Cesti-Browne, Ricky Junquera, Imtiaz Mohammad, and Clint Barras for running. And we’re proud of Dr. Mara Zapata, Cindy Lerner, and Ross Hancock for their hard-fought campaigns.

Without a doubt, we have lots of work to do to move our county, state, and country forward. We face a lot of challenges, but we also have plenty of opportunities. In 2022 we must vote Maria Elvira Salazar, Carlos Gimenez, Marco Rubio, and Ron DeSantis out of office. To do so, we will need a strong ground game in every corner of the county and all of the communities that make Miami-Dade a diverse, exciting place to live.

We look forward to beginning that work early in the new year, but we cannot do it without you. Sign up to volunteer with us today. We are the ones we’ve been waiting for—let’s get to work!