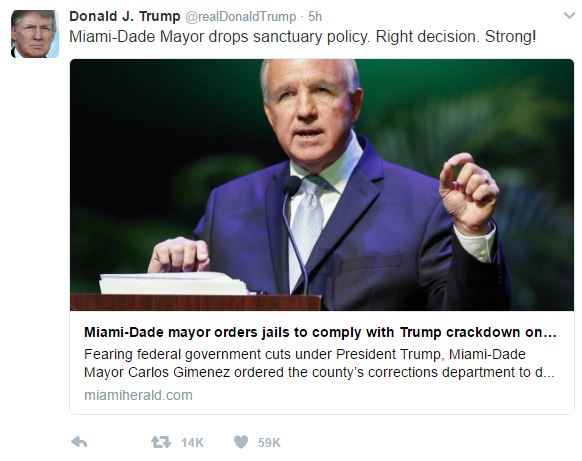 More Background:
Sanctuary cities essentially refuse to cooperate with US Immigration and Customs Enforcement (ICE) detainer requests for undocumented citizens who are arrested and would have otherwise been released from custody, unless the individual has committed a first or second degree felony involving violence. In other words, undocumented immigrants are given sanctuary in the city and largely sheltered from deportation. More than 360 U.S. counties fall under this category, including 39 cities, according to a report from the New York Times. Miami-Dade's policy would refuse to detain these immigrants unless the federal government pays them for the cost of their detention which the feds never did, effectively having the same effect as other sanctuary cities and counties.

Many local law enforcement officials favor the policies, saying they do not want the job of enforcing federal immigration laws. They say they rely on immigrants in their communities to come forward to report crimes.