Steve Simeonidis: It's on us to organize and engage over 600,000 Democrats in Miami-Dade

There are few events in the history of our country where everyone can remember where they were and what they were doing when it happened. Donald Trump’s election is one of them. In the last century, no Republican has won the White House without winning Florida. Only once in the last 60 years has the winner of Florida not gone on to win the White House. As the largest county in the largest swing state in the nation, Miami-Dade is the most important county in the country when it comes to denying him a second term. It is on us to lead the charge.

But it’s not just about defeating the White House incumbent. It’s about ensuring that our elected officials are fighting for our communities. We need representatives that understand that it is not acceptable for 1 million Americans a year to go bankrupt due to healthcare costs. Representatives that understand that in the richest country in the history of humanity, 1 in 5 children going to bed hungry is an embarrassment. That the land of the free should not house nearly ¼ of the world’s prisoners. That a working household should be able to support a family and be able to save for the future. That the government should not be invited into people’s bedrooms or doctor’s offices. That the more than 3,000 children that die every year from gun violence should be enough of a statistic to pass common sense gun reform.

This needed change requires good Democrats at all levels of government. The last time Miami-Dade had a Democratic mayor was more than 15 years ago. If only 1,125 votes went the other way in 2018, we would have flipped 3 state house seats in Miami-Dade. Just 57% of Miami-Dade voted in 2018, compared to 63% of Floridians statewide; the slightest shift in that number, and Andrew Gillum would be our Governor and Bill Nelson would still be in the United States Senate. It’s the local party that can help push us over the edge. We are the sustainable infrastructure needed to win elections and keep winning them. Candidates come and go but the party is here year-round, every year.

Many pivotal responsibilities fall to the local party. It is on us to organize and engage over 600,000 Democrats and it’s on us to register more. It’s on us to ensure outreach to liberal leaning individuals among the 450,000 people without party affiliation in our county. It’s on us to ensure all those convinced by the Democratic message show up to the polls, not just in November, but in February, March, April, May, August, September, October or whenever one of our 34 municipalities has an election. It’s on us to ensure that we are not only communicating in English but are employing a tri-lingual communications strategy to help Democrats win up and down the ballot. In order to make good on these responsibilities, we need resources to do so.

Help us secure those resources by joining us at the Blue Gala on November 2. Join us by sponsoring a table or purchasing individual tickets to the reception and dinner. Or purchase a ticket to the Blue Bash, which will take place alongside dinner. Help by reaching out to friends and family to support the Blue Gala, spread the word on social media, or volunteer.

We are at a pivotal moment in our country – it’s on us to seize it. 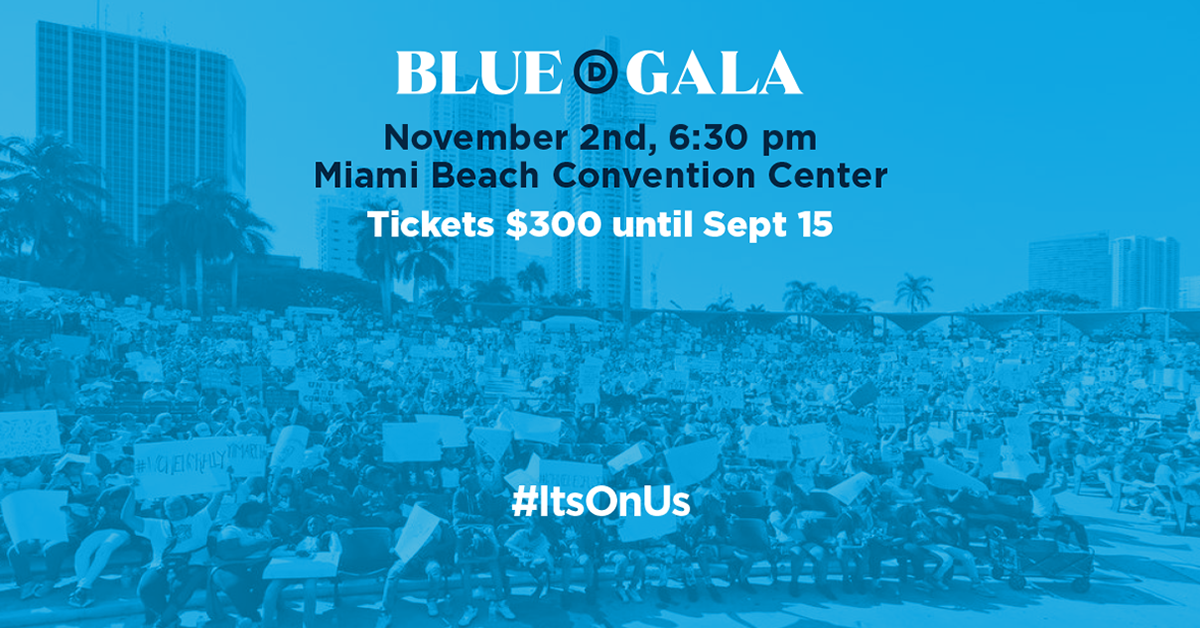