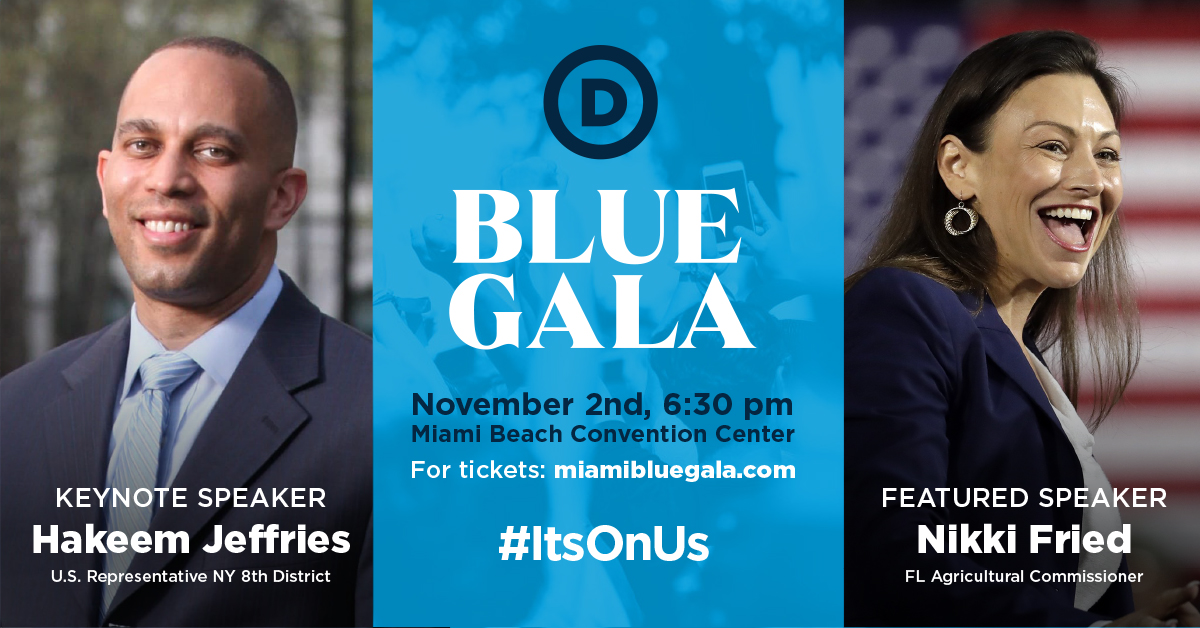 On November 2, 2019 – one year and a day before voters go to the polls in the next Presidential election – the Miami-Dade Democratic Party will host its annual celebration and fundraiser, the Blue Gala. The gala will be hosted at Sunset Vista, a brand new venue at the Miami Beach Convention Center.

More info on tickets at miamibluegala.com

This year’s Blue Gala keynote speaker will be Congressman Hakeem S. Jeffries, who is Chairman of the House Democratic Caucus. Chairman Jeffries has represented New York’s 8th Congressional District since 2013 and is the fifth highest-ranking Democrat in the U.S. House of Representatives.

The theme of this year’s Blue Gala is It’s On Us, highlighting that this is a pivotal moment in which it’s on each one of us to take hold of our country’s future. Miami-Dade County is the biggest county in the biggest swing state in the country. As a result, Miami is one of a select number of places across the country that can play a key role in determining the outcome of the 2020 presidential election.

“It’s no exaggeration to say that the 2020 presidential election is the most important election of our lives,” said Matt Haggman, 2019 Blue Gala Chair. “Previous generations have stood up at moments like this. We must do so as well. For us in Miami, this is especially true. The stakes have never been higher, but the ability for each one of us in Miami to have an outsized impact has never been greater.”

Funds raised at this year’s Blue Gala will support a year-long voter engagement effort across Miami-Dade County aimed at driving voter turnout. Alongside other efforts across Florida, the party is targeting more than a million voters throughout Miami-Dade County over the next year. This includes voter registration, canvassing, postcard reminders, peer to peer texting, and vote by mail enrollment, which has been shown to significantly increase turnout.

“In the last century, no Republican has won the White House without winning Florida,” said Steve Simeonidis, Miami-Dade Democratic Party Chair. “Statewide races in Florida have consistently been decided by the narrowest of margins. Driving up the vote in Miami-Dade by getting Democrats and independents to the polls can be the difference in winning the state.”

Each year at the Blue Gala, a select group of people are honored for their work across the community. This year’s Blue Gala honorees will be:

The Blue Gala will begin with a reception at 6:30 pm followed by a seated dinner, entertainment and speakers. Tickets starting at $500 can be purchased at MiamiBlueGala.com.

Additionally, people can purchase tickets to the Blue Bash, which will begin at 9 pm and allow attendees to watch the dinner speakers in-person in the same room as dinner guests. There will be high-top tables, open bar and dessert offered to Blue Bash attendees. Tickets are $75 and can be purchased at MiamiBlueGala.com.

Following the dinner, all attendees will celebrate into the evening and kick-off one year until the most important presidential election of our lives.

With more than 600,000 registered Democrats in Miami-Dade County, we represent the largest number of Democrats of any county in the state of Florida. We want to work with all Democrats to organize and effect change around the issues that will improve lives of those in our community. We invite you to sign up for email updates, and join us at county and local club meetings to learn how to get more involved.